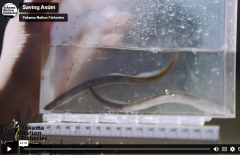 This past fall, biologists from the Yakama Nation Fisheries Pacific Lamprey Project initiated an operation to save asum (Ichishkiin; translated to eel-like lamprey) from irrigation canals throughout the Columbia River Basin.

Asum are an ecologically and culturally important species whose populations have been negatively affected by human alterations to their aquatic habitat; with the largest contributors being hydro-powered dams and irrigation diversions. When the irrigation canals are drained in the fall, many aquatic species become stranded.

Biologists from the YN Fisheries and community volunteers catch the fish and release them back into the Yakima River mainstem. The larval lamprey will stay within the Columbia River Basin for 3-9 years as an ammocoete. In this habitat they positively affect stream and river bed health. They eventually migrate to the ocean and remain there for about 2 to 3 years and grow to about 2.5 feet. In which they return to the freshwater systems to spawn.

Asum is an important part of Pacific Northwest ecosystems, both as predator and prey. They are also a valuable food and cultural resource for the Yakama Nation. Many tribal people have been interconnected with asum since time immemorial. Harvested asum were gathered and shared widely within their extended families for funeral, feasts, ceremonies year round (especially during the winter). It was especially important for tribal elders to teach the youth how to harvest, prepare, and cook asum.

For more information on the Pacific Lamprey Project, please go to https://yakamafish-nsn.gov/restore/projects/pacific-lamprey-project