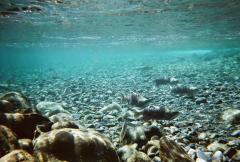 Cle Elum, Wash. – Adult sockeye transported from Priest Rapids dam in July are spawning above Lake Cle Elum. Sockeye change from ocean rearing colors of blue back to a bright green head and red body when they are spawning. The vibrant color of the sockeye and large number has biologists enthusiastic to share the success of the innovative program. The Yakama Nation is in its fourth year of reintroduction work that includes transporting sockeye into the lake, monitoring populations, spawning surveys, and developing strategies to maintain the Yakima Basin stock. The number that spawns has increased each year as the tribe negotiated an agreement to take up to three percent of overall run size.

Yakama tribal elders describe the value of sockeye to the people as a winter sustenance food to carry people until new spring food arrives. Sockeye also had a high trade value. Tribal members prize the sockeye for its rich flavor. “We hope to one day have a sockeye season in the Yakima Basin,” said Virgil Lewis of the Yakama Nation Tribal Council.

Sockeye feasibility studies concluded that with passage modifications sockeye reintroduction could occur. Once temporary passage was installed, the Yakama Nation and Bureau of Reclamation conducted additional studies. Yakama Nation negotiated an agreement with Washington Department of Fish and Wildlife based on Columbia River run size to transport adult sockeye from Priest Rapids Dam to Lake Cle Elum. “This is the only reintroduction model like this in the nation” said Dr. Dave Fast, Research Manager with the Yakama Nation Fisheries. “Our approach includes introduction of two Upper Columbia sockeye populations with different genetic and environmental backgrounds to offer the greatest opportunity for success in the Yakima River Basin.” The two stocks of sockeye that are in the Yakima Basin are the Okanagan River and the Wenatchee Lake.

“The Wenatchee River is different than the Yakima, but the lake is similar” describes Brian Saluskin, Fish Passage Biologist with the Yakama Nation Fisheries. “The Okanogan River is a low river for irrigation, much like the Yakima River.”

“The two stocks are transported the Lake Cle Elum in in July, sort themselves out and in the fall
come up from the Lake to the rivers to spawn,” said Saluskin. “In general, the sockeye come in
waves and then spread out.”

Historically, 200,000 sockeye would annually return to four lakes in the Yakima Basin, Bumping, Keechelus, Kachess and Cle Elum. Returning the sockeye to sufficient numbers to allow an eventual harvest in the Yakima Basin requires ongoing studies and partnerships to obtain permanent passage. The Yakama Nation continues to work with the Bureau of Reclamation, Washington Department of Fish and Wildlife, NOAA, USF&WS,Yakima and Kittitas Counties, irrigation districts, conservation groups and other partners to obtain permanent fish passage facilities.