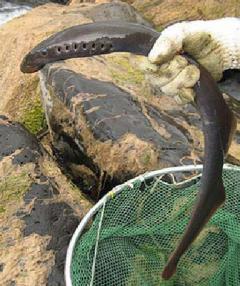 Toppenish, Wash. - The U.S. Fish and Wildlife Service and Yakama Nation announce the virtual arrival of Asúm the Lamprey to the Yakima Valley. Asúm (Ah-soom), the Yakama word for eel-like lamprey, is a member of virtual fish across Washington, Oregon and Idaho.

Luna the Lamprey Campaign uses social media to help one of the oldest fish species on earth connect with the younger generation.

Asúm the Lamprey, which returned to freshwater in lower Washington last year, will be the only virtual member to meet his mate and spawn. Unlike salmon, lamprey take two years to migrate from the ocean to their spawning grounds, using pheromones from other lamprey to guide their journey.

“The timing of the virtual lamprey parallel our data that shows our Pacific lamprey are in Yakima River tributaries at this real moment,” confirms Patrick Luke, lamprey biologist with the Yakama Nation.

Lamprey returning to the Yakima have challenges ranging from predators to poor fish passage, declines in water quality.

“We are trying to make the Luna the Lamprey campaign informative and interactive by having the public vote on the name of the female lamprey,” said Sean Connolly, Fisheries Information Coordinator, with the U.S. Fish and Wildlife Service. “Our virtual lamprey in Washington, Asúm and his mate, will settle, start building a nest, reproduce, and have children.”

They bring ecological importance to healthy rivers and salmon populations. Lamprey are an important food source for the Yakama people. In the last 50 years, the Pacific Lamprey has nearly died out in the Yakima River, and other Columbia River tributaries. The U.S. Fish and Wildlife Service, the Yakama Nation, the Bonneville Power Administration and other stakeholders are leading efforts to recover lamprey.